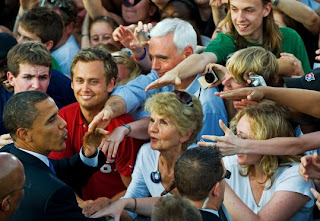 The Dutch Delegate (in het midden) in Berlijn (25 juli).

Bob Bragar is an American citizen, living in Amsterdam, the Netherlands, and elected by Democrats Abroad as a delegate to the Democratic National Convention.

We arrived in America yesterday. It’s great to be here – seeing friends, having fun, talking fast. The best.

But it’s disturbing, as well. Unlike in Europe, where it seems inevitable that Obama will win, here in the US that’s not true at all. It’s a very close race. A Reuters poll today gave McCain a big advantage. In the crucial swing states, it’s neck-on-neck.

If even a small part of what we see here on TV is true, then America is distracted by the issue-of-the-moment (offshore drilling, fears about Russian expansion) and lightening evaluations of Obama’s and McCain’s responses. Should Obama have taken a vacation last week? That was the burning blip. No attention to the things we see from abroad: America’s loss of respect, the decline of the dollar, burgeoning debt, uncontrollable and expensive war, and so forth. The Bush damage that we must repair. And no sense that McCain is Bush redux.