ANTISEMITISM AND THE DUTCH SOCCER FIELDS 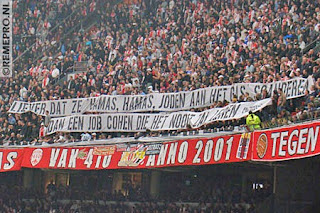 The authorities’ lack of desire to deal with the recurring racism and antisemitism in the stadiums has allowed the hate songs to gradually seep into society at large. Once there. it is almost impossible to combat. The antisemitic chants have spread in various directions elsewhere. At demonstrations against Israel, for instance, the chant “Hamas, Hamas, Jews to the gas” is often sung, mainly by Muslims. There
the target is real Jews. Soccer fans also started to sing the same chants outside of the stadium. The non-Jewish journalist Matthijs Smits relates that he was invited a number of years ago by Jewish friends in Amsterdam for the first evening of the Passover holiday. He entered an electric tram car full of soccer fans of PSV, who were on their way to a game against Ajax. They chanted loudly, “Hamas, Hamas, Jews to the gas.” Smits said that he did not know what would have happened if they had considered him a real Jew.

Rabbi Binyomin Jacobs, chief rabbi of the interprovincial rabbinate, tells that he, together with a non Jewish psychologist, once entered a train full of Feyenoord supporters. When the fans saw them, they started to chant: “Jews to the gas.” Jacobs said that he had the feeling that this whole train of “ordinary Dutchmen” was against them. “The psychologist shrunk from fear,” the rabbi remarked. “It seemed to me that that reaction wouldn’t help very much, so I feigned that I was indifferent to it as a sign of strength. One can consider this incident as an act of hooliganism, yet if one of these idiots had attacked us, many more would probably have followed him.”

In 2006, The Hague rap group Den Haag Connection (DHC) published a song on the Internet titled “Hague Jihad” (Haagse jihad). It included texts such as “Hamas, Hamas, all Jews to the gas,” “One day you’ll get the Hague Jihad on your roof,” and “Cancer Jews.”