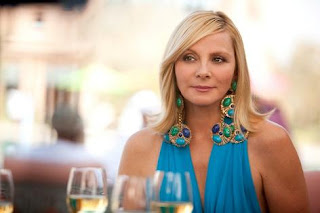 John Nolte over de film Sex And The City 2 (spoiler!):

"Samantha has spent the better part of her working vacation in Abu Dhabi being told by her PC friends, especially the uptight Miranda (Cynthia Nixon), to cover up her body – even by the pool – and to behave appropriately so as not to offend a culture that keeps their women firmly in place under heavy black burqas. Eventually her lusty needs get the best of her and she’s arrested for openly kissing a man on the beach. Upon release, her male Arab hosts add insult to humiliation by pulling the hospitality rug out from under her. This results in a mad dash to find a lost passport. But Samantha, who’s dressed reasonably by Western standards in a modest pair of shorts, halter top and blouse, is too uncomfortable to cover herself due to hot flashes (long story) and is soon surrounded by a menacing, hostile crowd of at least fifty outraged men.

This moment isn’t played for comedy. Violence is in the air and when Samantha’s purse spills and condom packages splay everywhere, something’s got to give, and God bless her, it’s Samantha who gives it. In a rousing and hilarious act of truly courageous, feminist defiance, with one hand Samantha waves her condoms like the flag of liberty and with the other lifts the “Fuck you” finger high in the air and lets that putrid gang of Islamist thugs have it:

A little later, back in America and with red, white and blue fireworks exploding overhead, Samantha’s getting her brains screwed out on the hood of a jeep as Carrie’s (Sarah Jessica Parker) voice-over mentions with no small amount of appreciation, “the land of the free.” "

Lees hierr verder In Which I Vigorously Defend ‘Sex and the City 2′.

En vervolgens: Leftist Media Enforcers: ‘Sex and the City 2′ Is Racist & Creates Terrorists — (And Why I’m Afraid of Glenn Kenny)