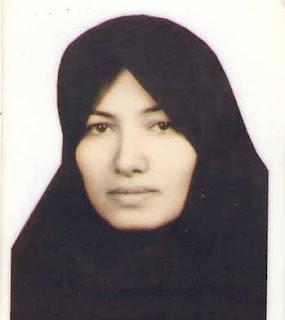 
Thanks so much for your support of the campaign to save Sakineh Mohammadi Ashtiani from death by stoning and execution. The public outcry is what has kept her alive so far. When her 22 year old son Sajjad first wrote an open letter asking people everywhere to intervene there was no legal recourse left and she was to face imminent death by stoning for ‘adultery.’
In another letter written a few days ago, Sajjad reiterates Ashtiani’s innocence and says:
‘What sort of justice is this?’ (http://iransolidarity.blogspot.com/2010/08/sakineh-ashtianis-son-do-not-let-her-be.html).
The Islamic regime in Iran is doing everything it can to kill Ashtiani and push back the international campaign. The regime has harassed her children and put pressure on Ashtiani, most recently, forcing her to ‘confess’ on Iranian state television to having murdered her husband and committed adultery. [You can see the footage on Iranian State TV in Persian here, which also criticises the International Sakineh Day we had organised: http://www.youtube.com/watch?v=O4Kfk06izqI&feature=related.]
As her other lawyer Houtan Kian has said she was tortured into making the false ‘confession.’ He has recently provided detailed and new information on her case: http://iransolidarity.blogspot.com/2010/08/new-documents-from-tabriz-and-tehran.html.

This follows evidence provided at the 30 July press conference in London by Mina Ahadi of the International Committees against Execution and Stoning which revealed actual court documents showing Ashtiani’s sentence to death by stoning for adultery.
The regime had also arrested the wife, brother-in-law and father-in-law of her human rights lawyer, Mohammad Mostafaei. They were subsequently released whilst Mostafaei was forced to flee the country in order to evade arrest. [He is now safe in Norway.]
They have even handed over her case for ‘review’ to deputy prosecutor-general Saeed Mortazavi, known as the butcher and torturer of Tehran (http://en.wikipedia.org/wiki/Saeed_Mortazavi).
As Ashtiani has said herself in an interview “The answer is quite simple, it's because I'm a woman, it's because they think they can do anything to women in this country” (http://www.guardian.co.uk/world/2010/aug/06/sakineh-mohammadi-ashtiani-iran-interview).
On 28 August 2010 – come out in 100 cities against stoning to show that the regime cannot to anything it wants to women. You can find out more about the events taking place on 28 August below and on how to organise your own event.
Join us! This must be the beginning of the end of stonings in the 21st century. And it must save Ashtiani’s precious life and reunite her with her beloved children.
Warmest wishes
Maryam
Maryam Namazie
Iran Solidarity Spokesperson
iransolidaritynow@gmail.com
0044 7719166731
www.iransolidarity.org.uk
http://iransolidarity.blogspot.com/
PLEASE ACT NOW!
1- Join a 100 cities against Stoning on 28 August 2010: http://stopstonningnow.com/wpress/2249. You can find out about events taking place in a city near you on this list.
2- Find out more about how to organise your own event here: http://iransolidarity.blogspot.com/2010/08/how-to-plan-action-day-to-save-sakinehs.html
3- Join a forum for organisers of events and to raise questions and make comments: http://stopstonningnow.com/100cities/
4- Send Sakineh a postcard of the city you live in or are visiting this summer telling her you are thinking of her and other prisoners on death row in Tabriz prison. You can address it to:
Sakineh Mohammadi Ashtiani
Tabriz Prison
Tabriz, Iran
http://maps.google.co.uk/maps?hl=en&ie=UTF8&q=tabriz+prison&fb=1&gl=uk&hq=prison&hnear=Tabriz,+Iran&view=map&cid=5511433647417998115&iwloc=A&ved=0CBcQpQY&sa=X&ei=kRVbTK2HKJOe_gaemtzoBA
5- Write letters of protest to the Islamic regime of Iran demanding Ashtiani’s release and an end to stonings and executions. Protest letters can be addressed to the below:
Head of the Judiciary
Sadeqh Larijani
Howzeh Riyasat-e Qoveh Qazaiyeh (Office of the Head of the Judiciary)
Pasteur St., Vali Asr Ave., south of Serah-e Jomhouri
Tehran 1316814737, Iran
Email: info@dadiran.ir or via website: http://www.dadiran.ir/tabid/75/Default.aspx
First starred box: your given name; second starred box: your family name; third: your email address
Head of the Judiciary in East Azerbaijan Province
Malek-Ashtar Sharifi
Office of the Head of the Judiciary in Tabriz
East Azerbaijan, Iran
Sayed ‘Ali Khamenei
The Office of the Supreme Leader
Islamic Republic Street - Shahid Keshvar Doust Street
Tehran, Iran
Email: via website: http://www.leader.ir/langs/en/index.php?p=letter (English)
http://www.leader.ir/langs/fa/index.php?p=letter (Persian)
Secretary General, High Council for Human Rights
Mohammad Javad Larijani
Howzeh Riassat-e Ghoveh Ghazaiyeh
Pasteur St, Vali Asr Ave., south of Serah-e Jomhuri
Tehran 1316814737, Iran
Fax: +98 21 3390 4986
Email: bia.judi@yahoo.com
6- Sign petitions in support of her case if you haven’t already done so. Here are two of them: http://stopstonningnow.com/sakine/sakin284.php?nr=50326944&lang=en, http://www.avaaz.org/en/stop_stoning/?cl=651962225&v=6766.
7- Write to government officials, heads of state, MEPs and MPs in your country of residence calling on them to intervene to save her life and to cease recognition of a regime that stones people to death in the 21st century. See Mina Ahadi’s recent letter to heads of states on this: http://stopstonningnow.com/wpress/?p=1694.
8- Donate to the important work of the International Committee Against Stoning, International Committee Against Executions and Iran Solidarity by making your cheque payable to ‘Count Me In – Iran’ and sending it to BM Box 6754, London WC1N 3XX, UK. You can also pay via Paypal (http://countmein-iran.com/donate.html). Please earmark your donation.
Gepost door hoeiboei