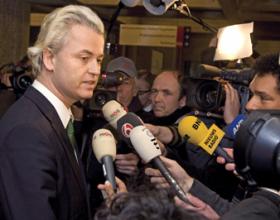 The old story: European politician gets in trouble, helps the Jews.


Geert Wilders, the big-gesture Dutch politician who has made a career out of outspoken
enthusiasms and denunciations in a country which is careful of its speech, has begun to take on water. In the June 2010 election, the Freedom party, which Wilders created five years earlier, was the third-biggest vote-getter. And when the free-market conservative Freedom and Democracy party and Christian Democrats formed a government with Wilders’s support, polls indicated that Wilders’s party was the most popular in the country. Between October and December 2011, its support shriveled by a third.


For once, Wilders’s problem wasn’t caused by his big mouth​—​the mouth which made him so thoroughly hated by the
Lees hierr verder.