The Melting Pot: Immigration in America 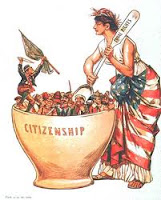 (...) Such was the scale of immigration that by 1930 more than 25 per cent of white Americans were foreign born or had at least one foreign-born parent. Confined as they often were to ethnic enclaves by a combination of economics, prejudice and convenience, it is a wonder that America didn't splinter into scores of linguistic pockets. But it did not, and for several reasons. 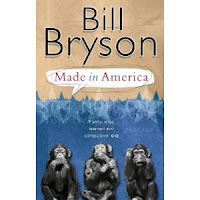 First, as we have already seen, people moved on as assimilation and economic circumstances permitted. An area like that around Hester Street in New York might remain Yiddish-speaking for several generations, but the speakers were a constantly changing mass. For the  most part, foreign immigrants couldn't wait to learn English and circulate in the wider world. Indeed many, particularly among the children of immigrants, refused to speak their ancestral tongue or otherwise acknowledge their ethnic grounding.

In 1927, Time magazine pointed out, older Jews were complaining that the younger generation didn't understand Yiddish. At about the same time H.L. Mencken was noting: 'In cities such as Cleveland and Chicago it is a rare second-generation American of Polish, Hungarian or Croatian stock who even pretends to know his parents' native language'.

Children not only refused to learn their parents' language, but 'would reprove their parents for speaking it in front of strangers'. As the historian Maldwyn Allen Jones has put it: 'Culturally estranged from their parents by their American education, and wanting nothing so  much as to become and to be accepted as Americans, many second-generation immigrants made deliberate efforts to rid themselves of their heritage. The adoption of American clothes, speech, and interests, often accompanied by the shedding of an exotic surname, were all parts of a proces whereby antecedents were repudiated as a mean of improving status.

'Every immigrant who comes here should be required within five years to learn English or leave the country,' barked Theodore Roosevelt in 1918. In fact, almost all did. (...)